What is a fuel cell

How does it work?

The concept of a fuel cell is not new. It has been demonstrated in the XVIIIth century by the scientists Christian Friedrich Schönbein and William Grove – who is generally credited with inventing the fuel cell in 1839. The term “fuel cell” was firstly used in 1889.

Grove conducted a series of experiments and proved that electric current could be produced from an electrochemical reaction between hydrogen and oxygen over a platinum catalyst.

The fuel cell concept is simple :

Inside the fuel cell, a redox reaction takes place to produce electricity and heat. For a PEM Fuel Cell, Hydrogen is processed at the anode where electrons are separated from protons on the contact of a catalyst. It is the oxidation step.

On the cathode side, Oxygen is carried out (extracted directly from the air) and is combined with electrons on the surface of a catalyst. This is the reduction step.

Finally, the Hydrogen protons are combined with Oxygen anions to produce water.

Even if the concept seems to be simple, in reality it is more complex to develop a highly-efficient and durable fuel cell. 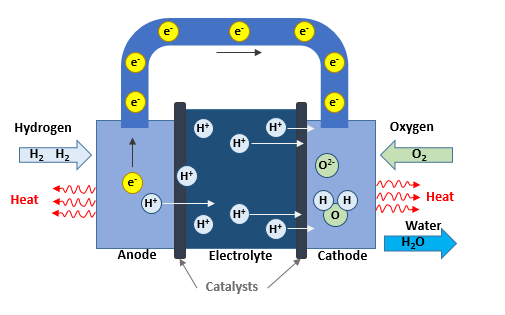 The hydrogen cell (also known as fuel cell) converts the energy of one combustible (hydrogen) into energy.

When were fuel cells developed ?

Nevertheless, the technology still remained too expensive. The keen interest for fuel cell systems and for hydrogen technologies reemerged with concerns about climate change and energy security. The automotive industry launched a huge research program in the early 1990s and several fuel cell systems for automotive purpose were developed.

What are the different fuel cell technologies ?

These were one of the first fuel cell technologies to be developed and were originally used in space programs. This type of fuel cell uses mainly an electrolyte composed of potassium hydroxide. The operation temperature is set between 65°C and 90°C but they can reach 250°C with high pressure conditions and high-concentrate electrolyte.

Most of AFC units use non-precious metal, such as nickel, as catalysts to speed up the reaction.

This type of fuel cell operates at relatively low temparture (below 100°C) and can deliver full power very quickly..

The electrolyte of a PEMFC is made of an acidic polymer membrane and its electrodes are platinum-based. The fuel cell can deliver a wide range of power, from few Watts to Megawatts but, currently, they are mostly used for light vehicles (such as trolleys) or stationary applications.

The PAFC technology is the most advanced fuel cell technology for development and commercial purposes. It has an electrolyte made of phosphoric acid, its electrodes are mainly composed of carbon materials and it operates at temperature between 180°C and 210°C. They are mainly used for CHP applications. Indeed their electricity production rate is relatively low but when the heat is harnessed the efficiency can reach 80%.

Unlike other fuel cell technologies, a PAFC is very resistant to pollution by carbon monoxide and the fuel cell is able to operate with lower hydrogen and oxygen quality. A substantial number of PAFC systems fueled with natural gas are already in operation around the world.

The MCFC operates at a relatively high temperature, above 600°C. They are commonly used to deliver tens of Megawatts to power large stationary systems.

Their efficiency ranges from 60% to 80% and the main advantage of this technology is the possibility to operate, without a reformer, on a variety of different fuels such as methane, natural gas and even coal derived fuel gas. On the contrary, MCFCs systems operate with injection of Carbon Monoxide at the cathode side and the reaction produces Carbon Dioxide and water.

The SOFCs operate at very high temperatures, between 800°C and 1,000°C. The high temperature improves kinetic reactions and avoids using a metal catalyst and, as the MCFCs, the SOFCs are able to operate with different hydrocarbon fuels and they do not need an external reformer. 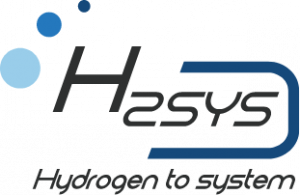